Welcome! To learn more about the Monticello United Methodist Church, click any title below. Select the title, Our Story, if you want an overview of our church. 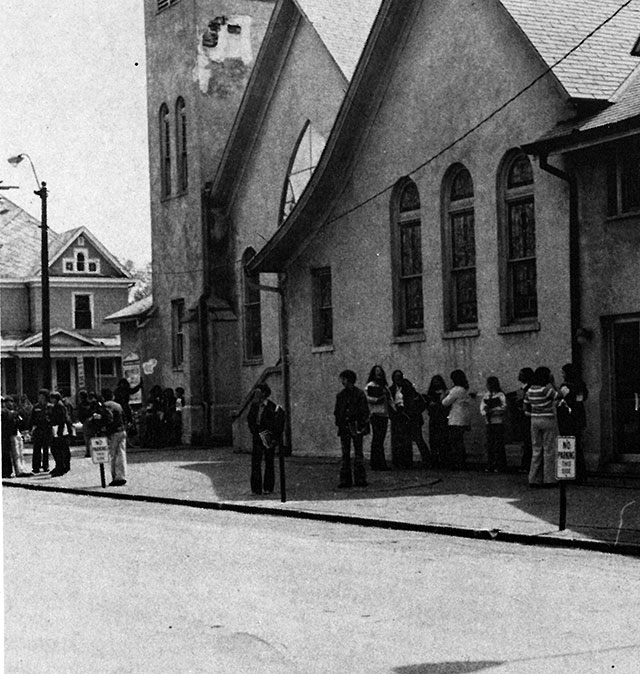 The first written record of our congregation is dated January 21, 1837. In 1850, the first church building was erected at the corner of Main and Marion Streets (The Monsanto building is currently in that location.) In 1886 Rev. W.P. McKinsey led a revival where over 200 people were converted to Christ. This necessitated a new and larger church. In 1887, a second church was built four blocks south, at the corner of Main and Harrison streets. This building has been through many changes and weathered many storms, but has remained a constant in our community and we make a difference as we are in ministry to one another and to those who are outside the walls of the church.

Over the years there have been a number of significant decisions made in the life of the church. In the early 60’s the church built a new education wing. This building addition shaped the ministry of the church for the next 50 years. This addition became a significant hub for the community in 1974 when a tornado hit Monticello. When the tornado hit, the church was poised to launch a radio broadcast of the Sunday morning services. This ministry has continued ever since. In 1978 a summer service was started at the Lakeshore Drive-in. A three sided chapel is pulled into the drive-in on the back of a hay wagon and participants sit in their car and turn their radios to a designated frequency to participate in the service. People are encouraged to come as they are and even invited to bring their pets. In the late 90’s the congregation owned the rights to a cable TV station. Even though the church does not still have a TV station, we continue to broadcast our services on the local cable network. Now the service is not only broadcast in the Monticello area, but throughout the northern half of the state of Indiana.

Around 2002 the church made the decision to remain a downtown church and set a goal of purchasing  surrounding properties. In a matter of three years the church transitioned from being land locked at the corner of Main and Harrison to owning over half the block. In 2015 a parking lot was added and in 2016 we added a new addition to our building. It is our prayer that this addition will shape the next 50 years of ministry as the education wing did in the 60’s. In 2015 we opened a daycare with 17 children. Today there are over 80 children receiving services from our daycare with an additional 30 children attending preschool classes each week.

When COVID hit in 2020, it necessitated that we do ministry differently. Instead of meeting at the drive-in for three months in the summer, we met there for nearly six months. We also started a live stream of our services on Facebook as well as on our Website. What started out of necessity became the launching point of our on-line campus that started in 2021.

God has been on the move through the Ministry of the Monticello United Methodist Church since theearly 1800’s and God is still on the move as we seek to reach out in love to our community in Monticello and around the world through our on-line campus.
Our Mission and Vision
Mission Statement

Our missions as United Methodists is to make disciples of Jesus Christ for the transformation of the world.

We practice open Communion. Open Communion means we invite all to participate in the Sacrament of Holy Communion. You do not have to be a member of our church or our denomination to receive Communion. The only requirement is that you desire to respond to the invitation to the Lord’s Table. That invitation is to all who repent of their sins and seek to live lives following after the example and the teachings of Jesus.

We practice both infant baptism and believer’s baptism. Infant baptism means that the child’s parents make a commitment to God on the child’s behalf, and the child is received into the Christian community. We believe God’s grace is involved in the act of baptism, but we also believe that baptized children have the responsibility to accept the gift of Jesus Christ into their hearts and lives on their own when they are old enough.

Believer’s baptism is practiced when a youth or adult has chosen to put his or her faith in Christ. The act of baptism is a public profession of the transformation that has occurred in the person’s heart.

When people put their faith in Christ as youth or adults, if they have been baptized as infants, we do not re-baptize, but we reaffirm the baptismal vows that were made at their baptisms.

We baptize infants by sprinkling. We baptize youth and adults by immersion, sprinkling or pouring.
I am interested. What's next?
Membership
Membership is not required to participate or serve in any of our ministries. Membership is a commitment to support MUMC through your prayers, presence, gifts, service, and witness. Those who wish to join the church by profession of faith or by transfer are invited to participate in A Disciple’s Path to learn what membership in the United Methodist Church is all about. If you are interested in knowing more about joining the church, please contact one of the pastors.